The most emerald Byzantine church of the famous Despotate of Epirus, quite far from the secularism of Byzantine Arta, but in the serenity of the idyllic landscape of Tzoumerka, is the famous Church of the Nativity of the Virgin or Red Church of Voulgareli. Red Church is located in the settlement Paleochori in Voulgareli, a village in the north-east of the Regional Unit of Arta. The church has the design of a cruciform inscribed temple, without a dome.

The location of the Monastery was important during the Byzantine period as it was an important station on the highway (route it probably was) leading from the capital “of the Despotate of Epirus”, Arta, to Thessaly. On the same road from the side of Thessaly, near the Gate of Trikala, the Catholicon of the Monastery of Porta Panagia is preserved, which was built during the “Despotate” period at the end of the 13th century by the half-brother of Nicephorus I, the regent -Sebastokrator Ioannis Doukas.

It is probable that the name “Red Church” derives from the vivid red color of the bricks. This church is decorated with red plinths, which form bands with meanders and serrated bands. The square red tiles in a rhombic arrangement on the sides of the temple and the large arched windows attract the visitor’s gaze. It is also known under the name Panaghia Vellas most probably from the homonymous monastery of Vella in Ioannina, of which from 1319/1321 to 1882 for some time the Red Church was a dependency.

The Red Church is devoted to Lady Mary and was originally the catholicon of a monastery, which probably due to its importance is also referred to as the “Royal Monastery”. From this monastic complex, only its Catholicon (Red Church) survives today, while not the slightest thing has been saved from its cells and other extensions today.

The text of the inscription is based on the publications of Anastasios Orlandos and completed in some places: 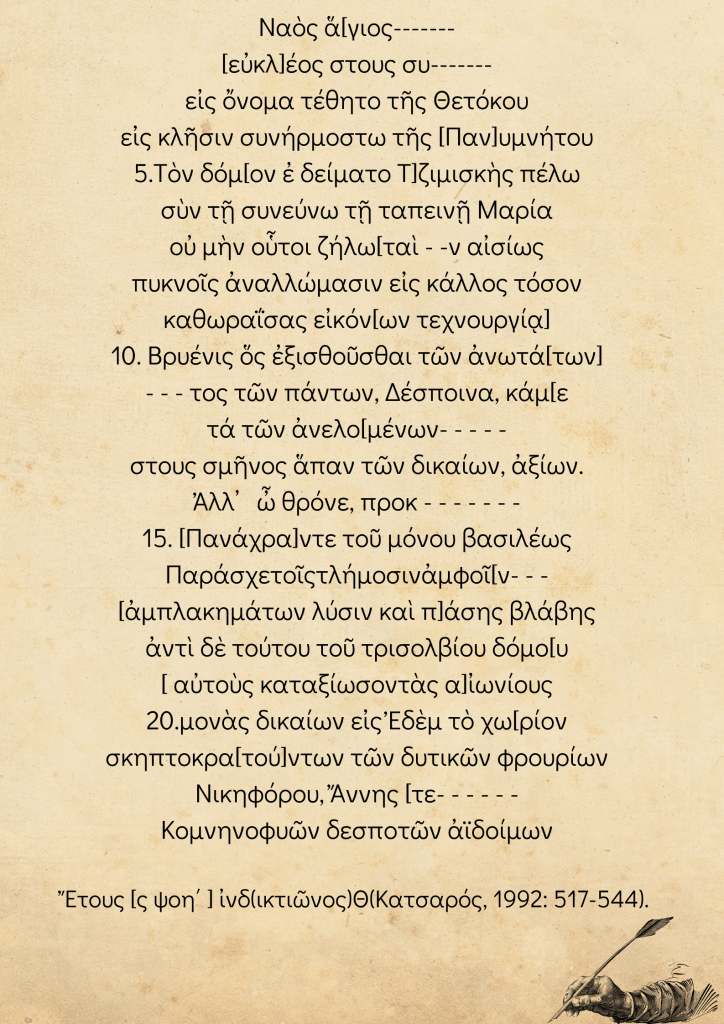 The building of churches and monasteries in the Despotate of Epirus was not confined to members of the ruling family. As in other parts of the Byzantine world in the thirteenth and fourteenth centuries, and in Constantinople itself, there were still private benefactors prepared to invest their money in the cause of saving their own souls. On the east wall of the Narthex (Pronaos), above the door leading to the main church, is depicted the representation of the owners of the church, which is one of the oldest of its kind in Greece. In the center of the representation is depicted the Virgin enthroned with the infant, which is framed by two full-length archangels, and below on the right and left are depicted in separate spaces the full-length figures of two pairs of folks. The couple depicted on the left side is identified with the Prostrator (Marshall of the Army) Theodoros Tzimiskes and his wife Maria. Protostrator Theodoros Tzimiskes is the founder of the Red Church as indicated both by the inscription above his mural depiction as the owner, in which, accompanied by his wife Maria, he holds in his left hand a model of a temple (Catholic of the Red Church) and offers it to the Virgin after building the temple in her honor, as much as and from the founding inscription above the western entrance of the main temple which states that: «Τὸν δόμ[ον ἐδείματο Τ]ζιμισκὴς πέλω σὺν τῇ συνεύνω τῇ ταπεινῇ Μαρία».

Inside the Red Church, although fragments of it are preserved, the mural decoration provides a good view of the iconographic program of the church and in fact is the only dated, inscribed, fresco ensemble of the Despotate. The illustration of the church was made by a remarkable painter of the end of the 13th century, who, however, followed older painting methods from his time. Of particular interest is the scene of the betrayal, after being walled off, is on display today at the Byzantine Museum of Ioannina.

The Monastery of the Red Church passed days of glory and greatness. But, at some point, it was abandoned and even used as a stable. However, the Holy Temple was declared a historical monument and rescued.

The master-builder of the Red Church had earlier built the church of Panaghia Vlacherna in Arta. When the master-builder learned that his apprentice had built the church of Paregoretissa, which was more impressive than Red Church (there is a relevant folk song referring to this incident: Let Lady Vlacherna see the Lady Mary of the Consolation (Paregoretissa), the more beautiful and better_Να βγει η κυρά Βλαχιόρνανα ιδή την Παργορίτσα που ήταν πολύ ομορφότερη και καλύτερη), he felt dizzy, fell from the roof of the Red Church and died.
His companions buried him in the church, but his blood, as if he had been killed, groans every night and was heard by anyone passing by. After a while, the bones came out and since then everything stopped being heard. According to this myth, Paregoretissa and Red Church were built at the same period, which has proven to be true. This tradition is better adapted than that of Paregoretissa, as in it the master builder himself is killed by the dizziness and the fall, without destroying his successor in the guild.

“In the old days, there was a kingdom in Tsouka. A very proud king reigned there. He started from his palace on horseback and came to worship at the Red Church in Paleochori. As soon as he reached the door of the church, he did not get off his horse to enter the service but entered on horseback through the door of the women, because this door was much bigger at that time. Later, when this king was expelled and the Ottomans came, then the Christians, in order for the Ottomans not to enter the church on horseback and to make it dirty, narrowed the door a lot and now in order for someone to enter, one has to bend down. I forgot to tell you that this king is said to have been not a Christian.”

According to Spyridon Lambros, this is obviously either from the Orsini family that ruled from 1318 until 1359, or from the Serbian or Albanian rulers, or from the Tocco family that followed until 1449, when Arta fell to the Ottomans (Λάμπρος, 1905).

In order to stop the rude cavalry of the Ottomans in the temple, the inhabitants of the area reduced the western entrance of the temple, a view matched with the obvious traces of the reduction of the western door of the temple, but without the coincidence of the existence of the temple (Independent state Epirus) and the kingdom in Tsouka (location three kilometers south of Voulgareli, where the remains of an ancient wall are found, while tombs have been found on the slopes of the hill.

The punishment of the dealer

At the time of the revolution and even earlier, a merchant from Chouliarades came to Paleochori and had four mules, which he tied outside the Red Church. He had been sent from Ioannina to steal the marble columns from the Royal Monastery and return them with the mules to Ioannina, in order to sell them. As soon as he entered, he hit the first pillar with a heavy blow to break it and a piece was thrown from the marble that can still be seen today. It seemed to him as if he had seen the Virgin Mary in front of him and he gave him a smirk on his face and he fell on his back, while the pillar fell on him and flattened him without killing him. He tried to get up, but he could not. Then he threw a handful of flowers at Panagia to forgive him and then the pillar “got up” alone, as he still stands today. Then the merchant left the flowers to the Virgin Mary and took his mules and left and confessed to the whole world the sin and the miracle he experienced. This tradition reflects the popular belief about the punishments suffered by priests and the seizure of church property.

When the Church was completed and officiated for the first time, the priest, whose name remained unknown, after the communion of the faithful took the Holy Glass to taste the rest of the Communion. Is he surprised to see a mouse in the Communion! To pour the Communion or to drink it together with the mouse? He decides to drink it.  The moment he picked up the forceps, a cat, which suddenly appeared, grabbed the mouse, dripping all over from the Communion’s wine, it passes among the faithful and disappears. The priest went out to the Royal Doors to give the bewildered believers an explanation of the strange event. To immortalize the event, they created a marble or plaster cat, which they placed outside the window of the Holy Bema. Today there is nothing of the sort visible. Of course, the upper part of the plaster glass of the window of the sanctuary had embossed animal-shaped busts, reminiscent of this representation.

The vision of the breeder

A certain Rubos was grazing his animals in the fields at night. And he saw a light going forward and entering the Church and. He set up a carter on the road that this light passed to find out what was happening. And he sees the light coming on him. The closer he got, the heavier his eyes became. He closed them and when the light passed by, he opened them and saw the light proceeding for the CHURCH, this continued for three nights. The last night, he saw a woman in white walking towards him holding a candle and three more extinguished candles. She offers him one to light it on using her own candle, but it did not light. The same with the second and the third candle. The third time she hit him in the face with her hand so hard that her fingerprints were left on his cheek! He then fell into a swamp and fell asleep, staying that way for more than 24 hours. His family became concerned and started looking for him. But where to find him? When he woke up, he went to his house scared and his family argued with him where he was and where he was coming from, with whom he had a fight, and we made these scratches on his face. Then he told them the story. This tradition is quite widespread in the Greek countryside and more in the popular strata, which also indicates the cultural level of the inhabitants of the countryside and their religiosity.